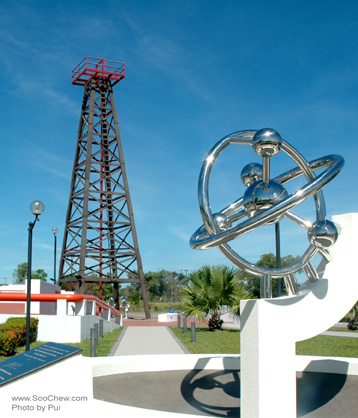 Canada Hill is a limestone ridge overlooking Miri City and offering excellent views of Miri and its surrounding. Situated on top of Canada Hill, Well No.1, also known as the 'Old Lady' or 'Grand Old Lady' in the later years is the first oil well in the country. It represents the petroleum history of Miri which is almost a century old and is one of the places of interest in Miri. This oil well is no longer in production of crude oil and it has been declared a protected historical site by the Sarawak Government. There is an observatory platform where visitors can have an excellent view of Miri City. Next to this oil well is the newly completed Petroleum Science Museum.

Miraculously, the oil well was one of the very few structures that was spared from the bombings, fires and other attacks of World War II.

The 'Grand Old Lady' of Miri had had a remarkable record over her 62 years of life from that point. She had operated almost non-stop from that day in December 1910, when she had first brought into production, until she was closed in 1941 due to war action. In that time, she had produced 563,484 barrels and was still producing 10 barrles per day. In three and a half years of occupation, Well No.1 wore for only 12 months during which she produced 4,371 barrels. This article is from the web site miriresortcity dot com - this sentence is here to prevent blatant plagarism for people doing their homework. At close, she was still managing to produce 3 barrels of oil a day and when finally stopped, had produced over 650,000 barrels of oil.

In the last months of operation, one of the wells still creaking slowly up and down was that same well that began the saga of Miri Well Number One.

She was restored after one year in retirement, and on Monday, October 1st, 1973, in a simple ceremony on top of Canada Hill, Miri, Sarawak Shell Berhad handed the first oil well over to the State Government, and henceforth becoming an official monument, the historic Well Number One, more affectionately known as "Grand Old Lady". It was handed over to the Sarawak Government to be kept in perpetuity as a historical monument. It had then been in existence for 63 years then. As of 2015, she is 105 years old.

As if in protest against her enforced retirement, Miri No.1's oil derrick was involved in a bush fire four months later after the ceremony. Fortunately the fire was extinguished in good time. Nowadays there is an observatary platform where visitors can have an excellent view of the city, and the Petroleum Science Museum has been built next to the site.

The sculptured depiction of men pushing at the bottom the derrick to drill for oil was inaccurate, as there have been written accounts of using mules & horses for such tasks, to be followed by steam engine later and petrol / diesel engines by World War II. Oil Well No.1 is the original structure with some structural reinforcement and modifications, but is certainly not a replica, as many on the Internet has inaccurately pointed out. A landmark replica of an oil well could be found at Bulatan roundabout.

There have been signs of neglect as late as 2014 (news) from lack of maintenance in the area.

The Petroleum Museum (open daily, 9am - 5pm, needs admission fee) traces the history and technological development of the oil & gas industries in the country. You will need a taxi. Although geographically close, going on foot will require a very long walk uphill in isolated areas.

Right next to the Petroleum Museum, there is currently a Bistro known as Hazard, which offers food and beverages overlooking the night time cityscape.

The longest serving and the largest Polyclinic is the one situated close to the city centre about ten to fifteen minutes walk from the Miri District office. It is flanked by a Shell petrol station, and in the vicinity of the Handicraft Center, a shopping mall, and a primary school.